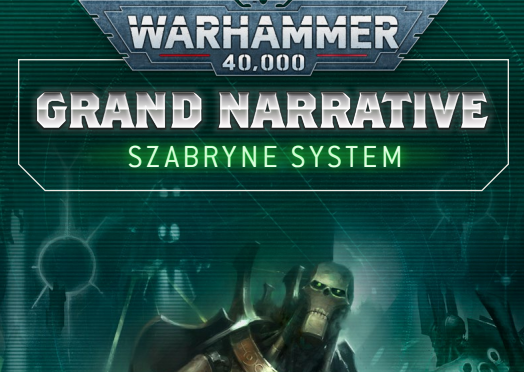 I just got back from Albuquerque, NM where Games Workshop hosted a Warhammer 40k Narrative event over the weekend. I’m going to split the After Action Review into two parts: part one will be the overall event and what I saw, heard, and experienced as far as the event itself, part two will focus on my own gaming experience.

With that said, let’s get into it, shall we?

For those who don’t know, Games Workshop runs a number of tabletop wargames, with Warhammer 40k dominating tabletop wargaming. I’ve previously attended some hybrid narrative/competitive events before (The Good, the Bad, and the Ugly in Milwaukee, WI, for instance). This is the first one that Games Workshop has hosted here in the US.

For what I experienced in general: I received an email a few months ago about the event, followed a link, and purchased tickets through Eventbrite. That’s pretty standard at this point for many gaming events. Less standard were the continuous narrative updates, about every month or so leading up to the event with a write up about locations in the battle zone and what was at stake. It was a neat addition that made it easier to get excited about the event ahead of time. They also hosted a discord server for Imperial, Chaos, and Interloper factions, which came into play later.

Games Workshop hosted the event at the Tamaya Hotel and Resort in New Mexico. It’s in a picturesque location in New Mexico and relatively close to the airport. Games Workshop worked with attendees and had a complementary shuttle to and from the airport. On arrival, they had badges and swag bags with more swag at the tables. All in all, that was all pretty cool.

The real fun started on the first night, where they had in-character war generals briefing attendees on the events in the system. With us broken down into factions, we got in-briefed by our war generals and then, the next morning, received more specific in-character guidance. It was a fun touch and it shifted the expectations away from ultra-competitive and win-at-all-costs gaming towards having a fun shared experience.

The games used crusade mission rules throughout the event, with units gaining experience and battle scars, some units becoming nigh-invincible killing machines while others… well, even disposable cannon-fodder has a use, right? Each mission had its own win and loss conditions, along with faction objectives, where a player may win the battle but fail to achieve faction objectives and therefore hurt their faction’s overall performance.

Throughout the three days of gaming, the various commanders oversaw the different battlefields (each room had a unifying theme for terrain) and acted as rules arbiters and inserted additional narrative flavor by giving opportunities for “fame” and “infamy.” Not once in a game did one of the commanders ask about points or score, just who won, whether or not faction objectives were completed, and if people had fun. I truly appreciated and valued how radically different this is to current competitive 40k, where players can get cutthroat for few extra points here or there at a tournament.

Instead, the atmosphere was far more laid back, with the undertone being to enjoy ourselves, to play as much as possible in-character, and to follow GW’s often-forgotten golden rule… to have fun. It worked brilliantly and I can’t overstate how much fun it was to feel part of a gaming community where even though our plastic toy soldiers are trying to kill each other, us gamers can laugh and joke about how well (or poorly) those models might perform.

The costumes for the war leaders were fantastic and their roleplaying of those characters was equally awesome. I found out towards the end that two of them (Eldar and Imperial) commanders are professional cosplayers/costumers. The acting on their parts was awesome, and when the Imperial general came in and gave the equivalent of a dad’s “I’m not angry with you, just disappointed” on the end of day one after a whole lot of defeats, he played it perfectly.

The Eldar general really hit the note of alien arrogance and disdain perfectly, as well. Similarly, the Chaos general had some excellent frothing madness. The addition of make-up and battle scars throughout the weekend showed that this wasn’t some static event, that things happened.

At one point, the Eldar commander walked up to a table and announced that the player there had a crucial role to play and awarded him extra command points in his battle. Similarly, kill team and aeronautica imperialis events tied into the final battle and provided advantages to the factions who had won.

It was an awesome weekend and well worth the price of the ticket. I really felt like it was a shared experience and pretty much everyone I spoke to had a blast. The number one question coming out of it was whether they would do this again and when tickets might go up online.

That said, there were a few discussions of potential ways to further improve the event. A number of gamers I played with were hoping for more varied terrain (often difficult for events where everything has to be shipped in to support, plus on so many tables). The general consensus was that some kind of space-hulk or ship style playing boards would have been awesome. Other ideas that came up were D-Day style landing beaches or drop zones where attackers come in against some kind of fixed defenses.

Those both tie into the other ideas that fellow gamers got excited about, which was leading some of the games off with desperate last stands against numerically superior foes, with a player just holding out as long as they can against multiple opponents. What also came up was multi-faction battles with three or more competing players on the same table. They had a big reveal on the last day where key players were invited for an apocalypse-style showdown with several titans, it would have been nice for all the players to have some similarly big battle. Those thoughts are all ways to add a bit more spice to the overall gaming experience.

On the whole, it was a really great event and fun weekend. I came away with a lot of inspiration, developed some ideas for writing, and met some awesome people that I got to share the whole experience with. I will definitely attend the next such event and I really look forward to it!

I’ll post Part Two next week. Thanks for reading!