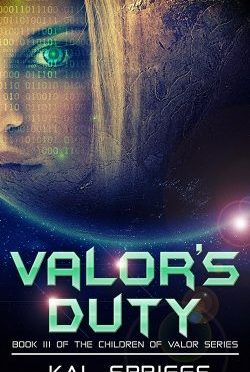 Hey everyone!  I’m happy to announce that Valor’s Duty, book three of the Children of Valor series will be coming out on May 18th!

Duty is heavier than a mountain; death is lighter than a feather.
Jiden’s life at the Century Military Academy is forever changed when she is asked to volunteer for a special program.  They want to implant her and other cadets with a special, prototype neural computer.  It will make them smarter, more capable, and able to split their attention between dozens of activities.  Her friends jump at the opportunity… but Jiden isn’t so certain.

She sees it as her duty, to her world, to her friends, to volunteer despite her doubts.  But as things begin to go wrong, as her life is put in danger once again, Jiden quickly realizes that she may have shouldered a duty that she can’t bear.  The implants might be driving her fellow cadets violently insane… and Jiden may be next.

She will need to muster every ounce of courage, every bit of intelligence, in order to save her friends.  Even then, her own survival might be too much to ask.  But Jiden doesn’t know how to back down, and she’ll do her duty no matter the cost

The first snippet is coming later this week!  Check back for more information.  Thanks everyone!