Jiden’s parents barely scrape out a living on the dry, dusty world of Century. Jiden wants more for herself and she is ready to step into a bright future, one which may lead her far from the frontier world of her birth.

She’s just got one obstacle: five months of military school. She’ll be away from her friends, subjected to long hours and a crushing work load. Yet as the challenges mount, she finds that there may be more to life besides comfort and security… things like duty and service.

Valor’s Child will be coming on 30 June.

We want you! Sign up today for the Century Military Academy!

What is the Century Military Academy, you might ask? It’s the new and improved way to get information, snippets, previews, and exclusive access to book giveaways.

I’ll  update it weekly with what’s happening, where to find me for conventions, and for those who sign up,  I’ll have a free short story: The Cost of Valor. 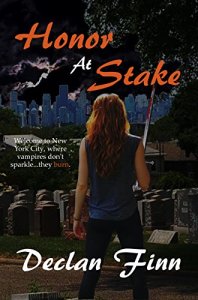 Honor at Stake is what most people would label under the Urban Fantasy genre.  That said, it’s also got a bit of a blend of paranormal romance in there.  What you’ll also find is philosophy, theology, and a great deal of intelligent writing.  And ninjas.  Let’s not forget the ninjas…

Honor at Stake is clever and funny.  The characters are witty, the plot is fast-paced and the story is engaging.  The premise is one where you don’t quite know what’s going to happen next, where magic and the preternatural abounds and where characters accept things and adapt because that’s what they have to do to survive.

Declan writes a genre-blending story that keeps you turning the pages.  The main characters are smart, engaging, and keeps you guessing.  He plays to your expectations and then pulls the rug out from under you.

The story is very much in the vein (pun intended) of other urban fantasy stories that include vampires, such as Jim Butcher’s Dresden Files and Larry Correia’s Monster Hunter International.  The bad guys are bad, the good guys are trying their best, and all us mere mortals stuck in the middle have a hell of a time.  I recommend it, especially if you like your contemporary fantasy with a pinch of humor and a lot of action.

At times, the action can be almost over the top, somewhat remenicent of Big Trouble in Little China.  But the humor keeps that in check, and while the main characters are dangerous, there’s always a villain ready to put them in their place.

It’s clear from the ending that there’s more to come.  I, for one, can’t wait to read more! 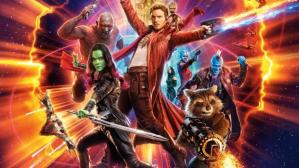 (Spoiler Free) Guardians of the Galaxy, Vol 2, is in some ways even more of a trippy ride than the first one.

There’s the same manic energy, the same ridiculous, over the top humor.  It’s exciting, and epic, and as crazy as a box of ferrets on crack.

Guardians of the Galaxy was unique, fun, and more than a little unhinged.  The characters were interesting, the stakes were high, and it had surprising depth for a movie with a talking racoon.

Flash forward to Guardians of the Galaxy Vol 2.  It turned the crazy to 11,   More characters, more excitement.  It’s an ensemble cast where every character has their moment to shine.

It’s not entirely perfect.  Gamora never quite gets the emotional depth of the other characters, despite several opportunities.  Baby Groot is highly entertaining, but rather limited.  There’s a sort of predictability to the plot, we already know where the characters are going to end up, just from seeing them at the beginning.  This is them finding their groove, seeing how they’ll work together.  It’s a team-building movie.  But it’s just as much fun as the first one and there’s plenty of great jokes.

All in all, it’s a solid movie.  The actors did a fantastic job, the characters were spot on, and the humor and action were both great (if sometimes mind-boggling).  The themes of family run throughout, and the most powerfully emotional scene in the movie was one in which there weren’t any words.