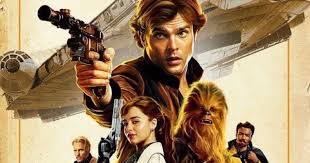 As the year has been pretty busy, I didn’t get to see Solo while it was still in theaters.  To be clear, I didn’t approach this movie expecting it to be the best Star Wars movie ever.  I wanted something fun and light-hearted, something to distract and entertain.  And coming away from it, that’s what I got.

It is fun, fast paced, and it’s got enough action and characterization that you come to care about the characters involved.  The movie went through extensive rewrites and reshoots when Ron Howard took over.  You can pretty much identify, scene by scene, where his influence is.  The actors, action, and plot move along comfortably.  Other sections lag behind a bit and there’s a much more campy feel.

The story has plot-holes you could drive a Star Destroyer through and additions to the Star Wars setting that range from interesting to asinine.  But it moves along well, the acting isn’t bad at all, and it passes the bar of being *fun* if a little bit of a stretch at times.  It feels very rushed.  Solo goes from a street rat to an “experienced” smuggler in the course of a movie.  Sections of the ending were clearly in the campier/more humorous tone rather than the grimmer, darker tone of other parts of the movie.  This would have made a better TV series than a standalone movie.

Solo is a movie that didn’t do well not because it wasn’t a decent movie, but because of the disappointment that fans had with The Last Jedi (and that in itself is a can of worms I’m not going to open right now, but you can read my review of TLJ ).  It’s also a movie that didn’t necessarily need to be made and which answers questions most of us don’t have.  We don’t need to know where Han got his blaster or his dice, or why he likes the YT 1300 Corellian Freighter.  There was a perfectly good novel series that covered all that, once upon a time.  It’s not to say the actors or director did a bad job.  They didn’t. There were sections where I was caught up in “young” Han’s story… but again, it’s a story that didn’t need to be told.  It was entertaining and fun along the way, but I wish the focus had been more on the story itself, rather than an origin story for Han.  I wish there’d been more characterization.  More ties to a greater universe, instead of the barrage of homages to the original trilogy.