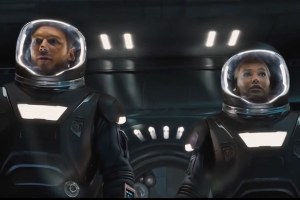 Passengers is a movie that’s seen a lot of grief over the past month.  I think that’s in part because it asks difficult decisions.  In short, one character makes a morally terrible decision early on… and he makes it for a very human reason.

When he makes that decision, the viewer can empathize with him.  In fact, I’d go as far as to say that most people, if they’re honest with themselves, would come to the same decision and they’d chose the same way.

The story doesn’t make light of that decision, but it also doesn’t linger.  From that point on is where much of the story really begins.  There’s a lot to take in, with good humor, romance, and even some tense moments.  It’s a genuinely fun movie with some fantastic chemistry between the characters (human and android included).  The characterization is strong and as a viewer, I was caught up in the little triumphs and big failures that the characters experienced throughout the movie.

Part of that, I’m sure, is that the movie has such a sense of optimism, of humans pushing new barriers and solving problems.  There’s elements of such grand hope, of literally reaching for the stars, that I want to see it again, just to relive that experience.  The characters in Passengers are put in extremely dire straits, but they never question their decision to journey to the stars.  Indeed, the movie itself never questions that.  This isn’t the technology cautionary tale that Hollywood likes to beat people with.

I think the reason that Passengers gets grief is that it forces the viewer to like and appreciate a different perspective… and to consider that other perspective.  It’s not a safe movie, where the ice-bergs in a relationship are tiny things.  Yet, it is a love story, and there’s elements of forgiveness and atonement.   It is a very human movie, where the main characters are flawed in ways that ring true.

This is a movie that I plan to buy.  It’s fun and for those who can handle it, it examines elements of what it is to be human and to make bad decisions.  It’s a movie I want my kids to watch someday and to talk with them about.  I highly recommend seeing it.