Here’s an update on what I’ve got going on for the rest of May.

First off, Valor’s Duty, the third Children of Valor book, will be out on the 18th!  I love writing these books and the feedback from my readers tells me you like them, too.

I’m working on a submission for a publisher, one of the first I’ve actually pitched a concept and gone forward with instead of writing and submitting.  It brings an interesting set of challenges and I may write a blog post about that, if there’s interest.

I’ve yet to see Avengers: Infinity War.  Mostly because I was in Germany for work and I didn’t want to see it without my wife.  I’ll have a review post up soon(ish), once I get a chance to see it.  I’ve also got a stack of books I want to read and review.

If you’re a writer and you want to see how a slush submission works for real, I’ve volunteered one of my manuscripts for the Baen Live Slush reading, happening on 16 May, it should feature at either their 10 AM or 2 PM session and  I’ll post a link after it’s completed.  Here is a link to their channel:  (https://www.youtube.com/channel/UCjV7Nn4-bkB48wDjtobIuPQ)

Next month I plan to release another book.   Stay tuned for snippets and other updates, and thanks everyone for reading! 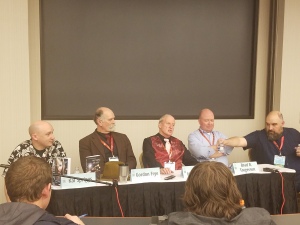 Here’s my updated convention schedule for the year, with events I’ve already attended in italics and a new one added in bold.

Yes, I’m excited to be going to Dragon Con this year as an Attending Professional.  I have no idea what my panels will look like, yet, but I’m really looking forward to the event!

March is here… wow.  It’s kind of a shock to say that.  I’ve been busy.  Really, really busy.  Between work, and moving (did I mention I was moving?  Yeah, I’m moving, surprise!), writing, editing, and raising a very active two-and-a-half-year-old… yeah, 2017 is flying by.

I’m mostly done with Ghost Star, the sixth book of the Shadow Space Chronicles.  However, with the sort-of-unexpected move, it’s going to be delayed, unfortunately.  I hope to publish it in May, which is further out than I’d like, but I don’t think I’ll be able to get it completely done, edited, and sent out to beta readers before the end of the month.

In other news, I’m hoping that the move will increase my writing productivity, with (hopefully) an hour less of my day spent in traffic.  I’ve also done the rough outline for the third book of the Fenris/Rising Wolf series.  I’d planned to write it this month, but I’ll fit it in somewhere.

After that, I’m going to write the second book of my YA series: Valor’s Children.  The first book is going to be a big release in June and I’m planning on doing a release party at Liberty Con.  My goal for the series is to have most of the books written so that I can stage their release over a few months.

I’ve also been bitten by the zombie bug.  No details for readers or an expected publication date just yet, but I’ve got around twenty thousand words of <title redacted> written, which is just over a quarter of the book.  Considering I wrote all of that in just three days, it tells you that I’m excited about it.

In other news, I’ll be doing some revisions to the mailing list.  I hope to have those revisions done after I move.  There’s been a delay in the newsletter as a result, but it should be up in April and going full-steam in May.

I’m working on Fate of the Tyrant, Book III of the Eoriel Saga.  It is a big book for me, since this is concluding the fight over the Duchy of Masov between Lady Katarina Emberhill and Lord Hector the Usurper.  Needless to say, there’s going to be a few fights.

Later this month (23-25 October) I’ll be attending Mile Hi Con in Denver.  I don’t yet have a schedule for my panels, but I’ll be trying to find some table space for signings and I hope to see some people there.  Colorado conventions are always awesome, so if you’re in the area, you should definitely attend.

In other news, Odin’s Eye, sequel to Fenris Unchained, will be coming out later this month.  I don’t have the exact date, yet, but my publisher is trying to line things up to tie the release in with Mile Hi Con, so hopefully I’ll be showing off the new book at the convention!

I’m also trying to line up a book signing tour for the release of Odin’s Eye and The Prodigal Emperor.  It will probably be mostly local, but if you’re interested, let me know here.

One more reminder, don’t forget to subscribe to my newsletter to automatically enter to win a signed copy of The Prodigal Emperor!

That’s all for now, thanks for reading!

I am excited to announce that starting in July I’ll have a Monthly Newsletter, which will post free fiction, snippets from upcoming books, updates to my schedule, and announcements for when books are released.

Kicking it off, subscribers will be entered into a contest to win a signed copy of Wrath of the Usurper and also the first five people to sign up will receive a free Renegades themed T-shirt.